Holidays are the perfect time to indulge in board games! Whether you go for one of the...

Every year millions of beautiful trees are cut down and transported around the world to...

What should I serve for Christmas nibbles and drinks?  Given most of us have not been...

Looking for ways to be more sustainable with your gift wrapping this year?

Christmas is such a fun and festive time of the year that it is easy to forget the...

The countdown has begun and Christmas day will be here before we know it.  It's time to...

Resort BACK TO BLOG HOME 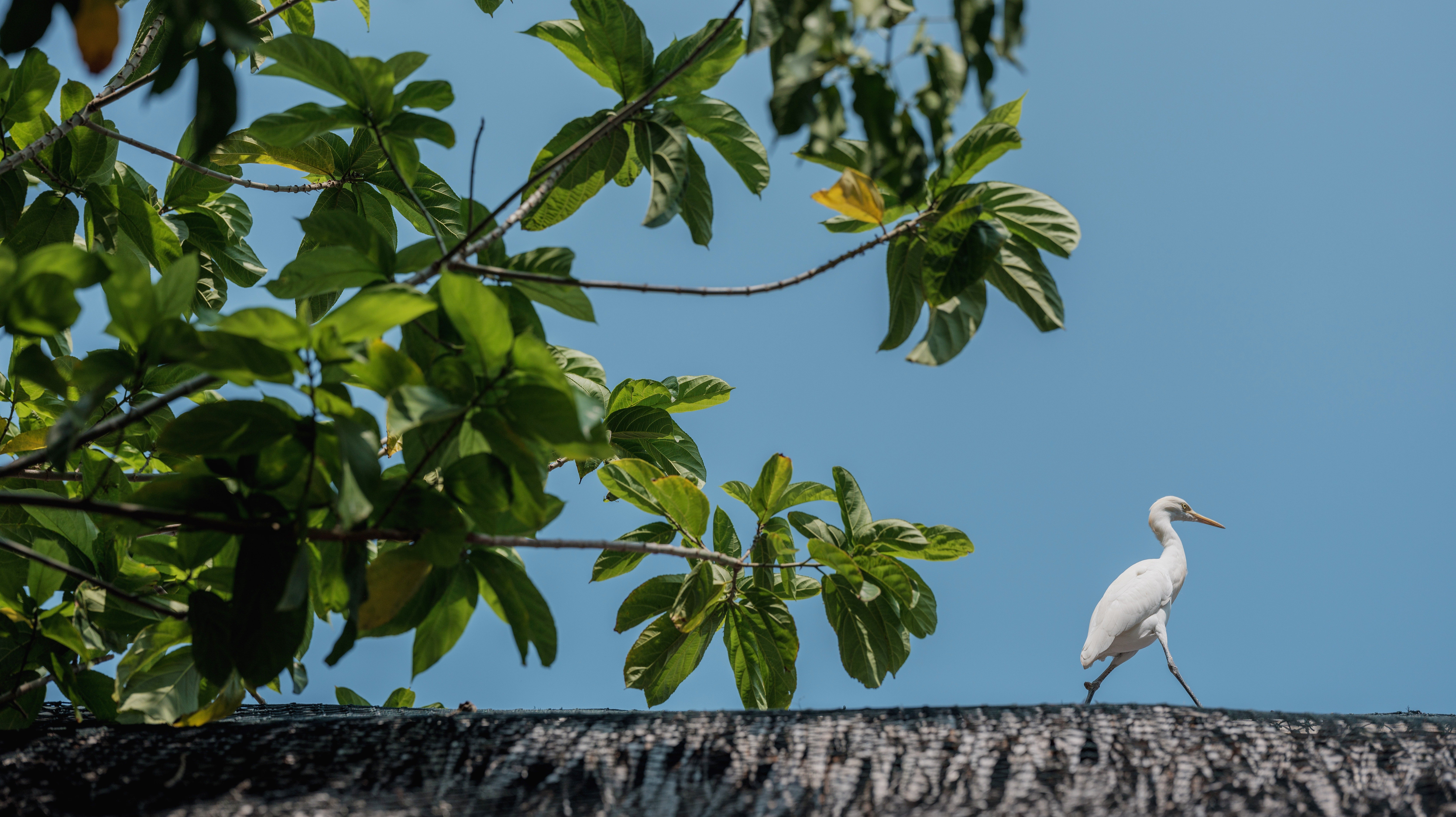 There are so many benefits of birdwatching – many of them connected with bringing us closer to
nature. A naturally meditative activity, it reduces stress and anxiety without us even realising it!

Many of our guests comment on the beautiful variety of bird species they spot all around Bawah.

That’s not surprising – there are around 1,785 species of birds in Indonesia some of which are resident birds and others migratory birds.

Being a remote group of islands means that we not only have good forests with a variety of trees
for resident birds, but we also offer a much-needed resting point for many migratory birds on their journeys across the South China Sea. 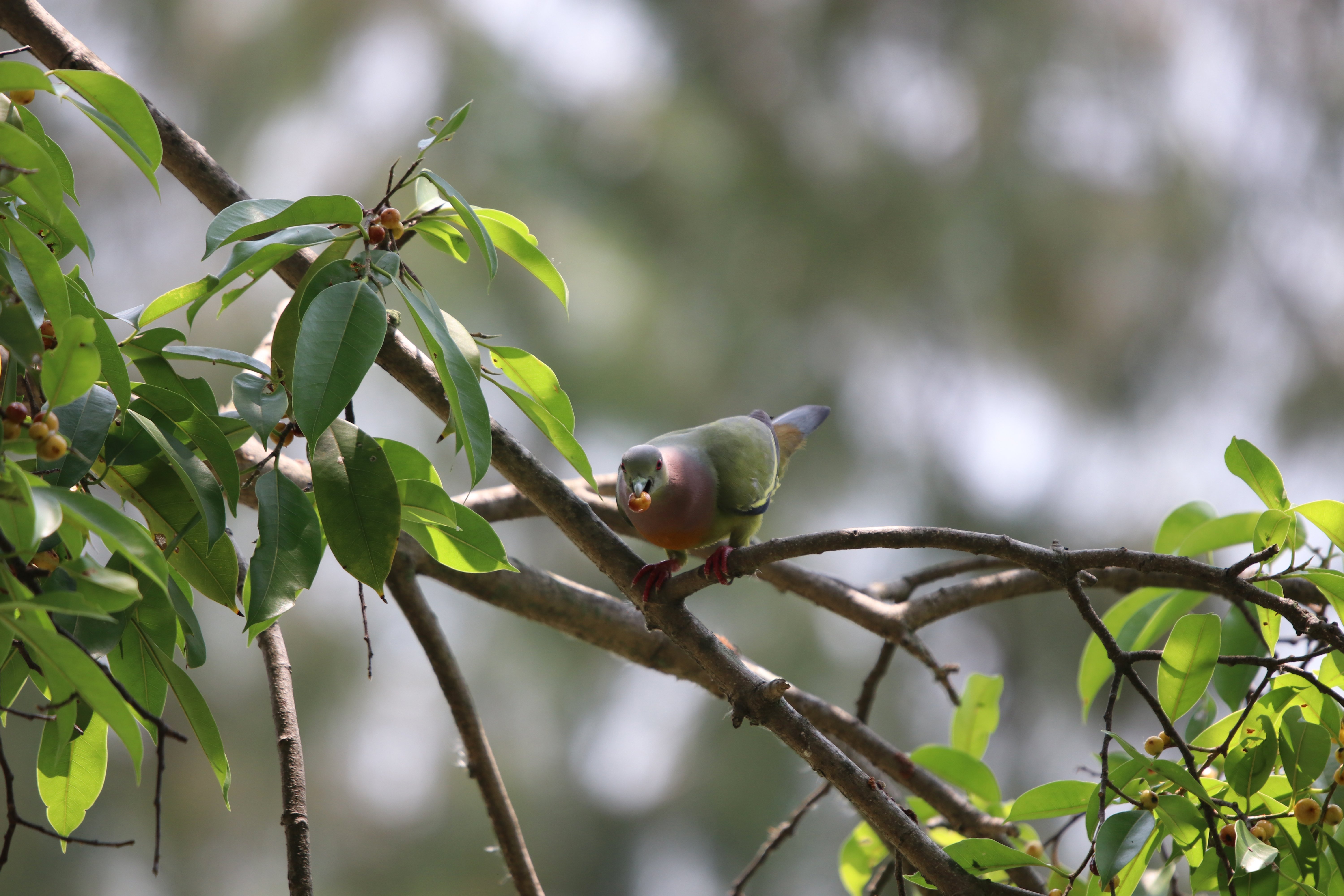 Some of the best spots to birdwatch at Bawah are often simply from your own verandah – or from Tree Tops restaurant, with its beautiful vista over the forest. Whether using binoculars or a telescope – or even with the naked eye – you are sure to spot some of the most common birds of Indonesia as well as some rare Indonesian seabirds.

Sit quietly, be as still as you can and get birding! Here are just a few of the most interesting birds that we’ve spotted recently at Bawah: 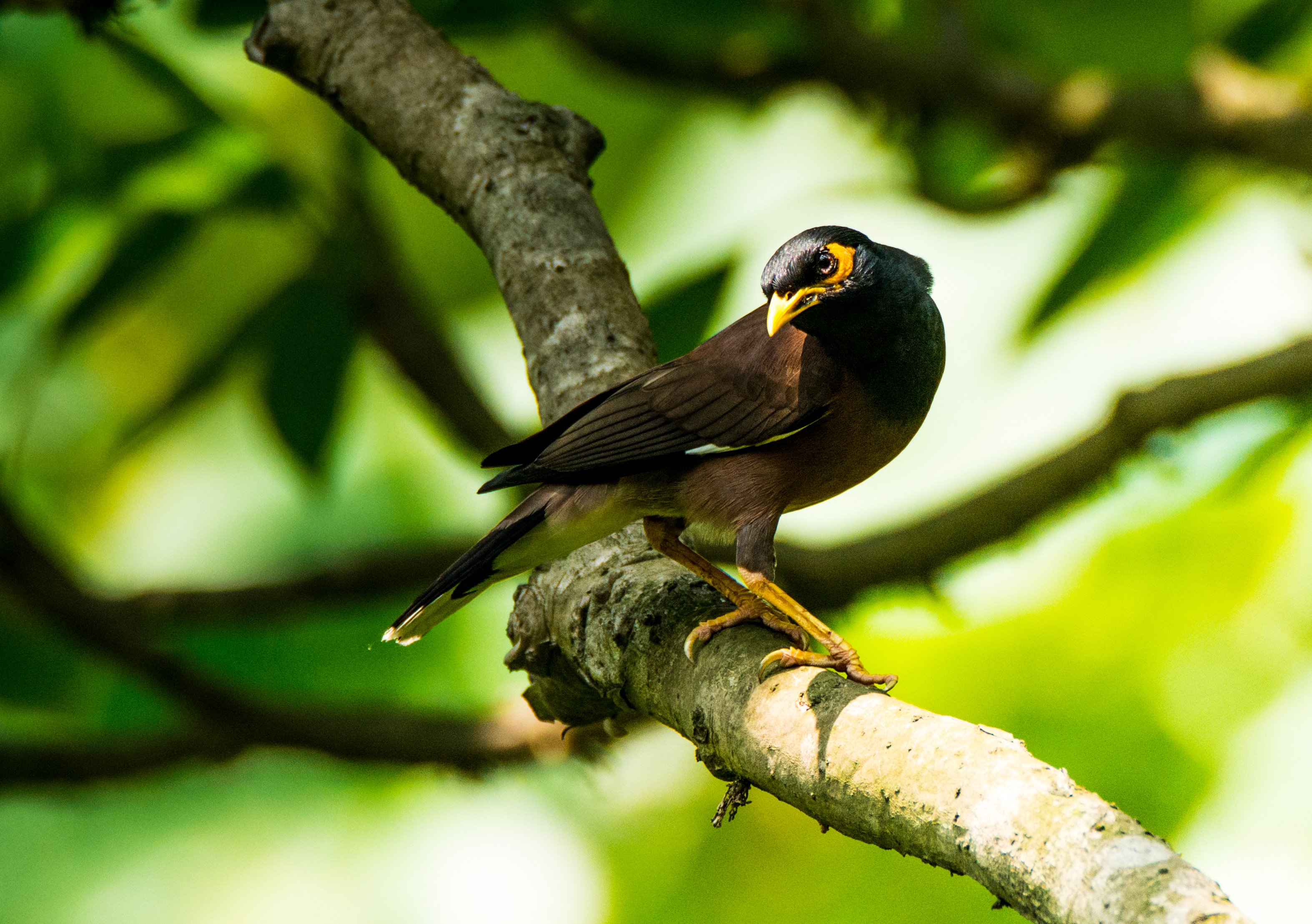 The common hill myna (or mynah), sometimes called the myna bird, is a member of the starling
family and is found mainly in the hill regions of South Asia and Southeast Asia. They prefer the
humid, rainy climates of jungles, evergreen and deciduous forests, both in hilly areas and at sea
level.

It has glossy, green-black plumage on its upper body, contrasting with bright, orange-yellow
patches of naked skin, an orange bill and fleshy wattles on the sides of its head and nape. Its
head has a crown, and the head, nape and breast have a purple glow. There are seven or eight
subspecies, which differ only slightly.

Populations of this forest bird from India are stable in some areas. In others, its numbers are
declining as a result of loss of habitat due to forest destruction, along with widespread trapping
for the pet trade. 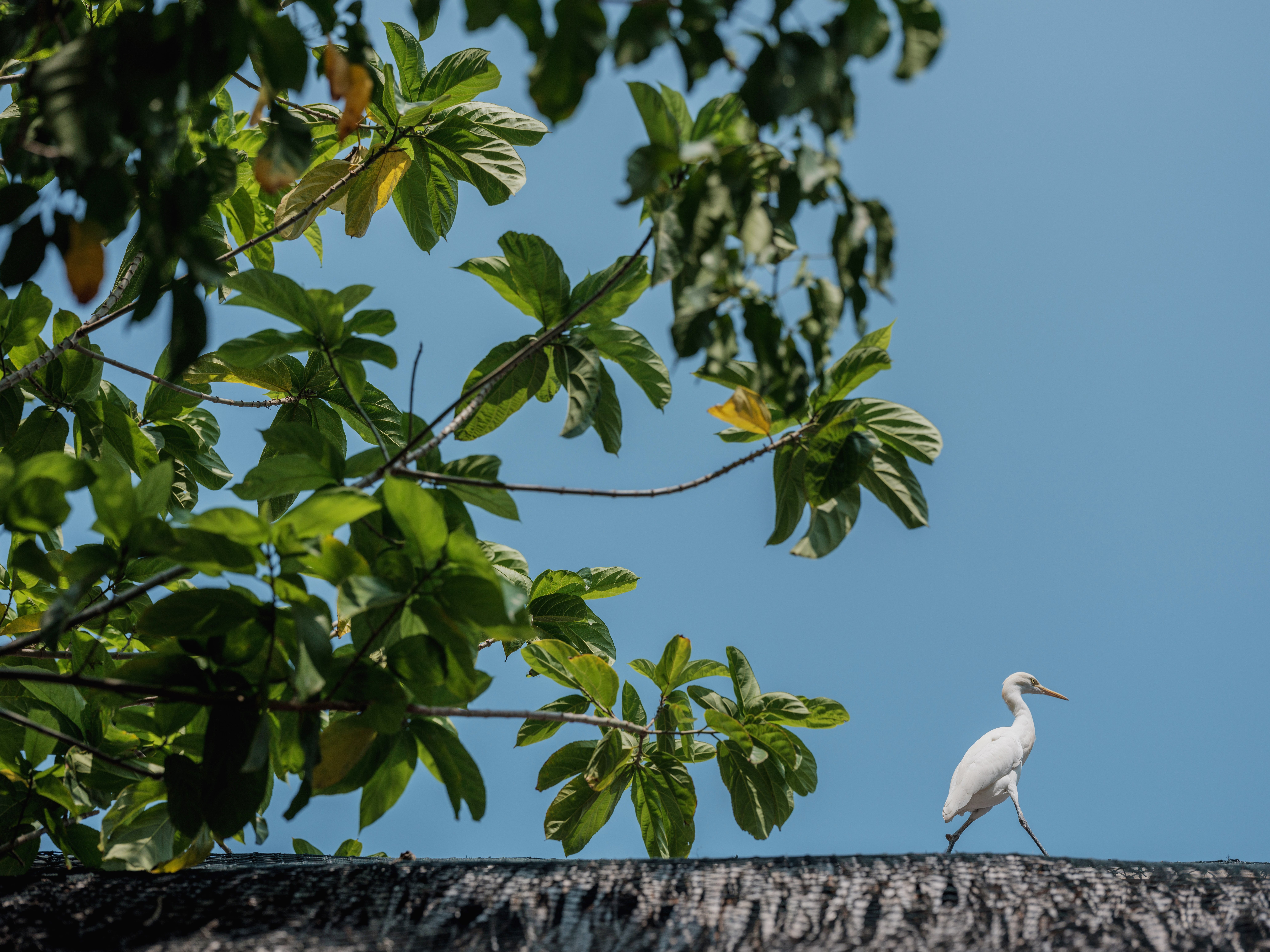 Described as the most cosmopolitan species of heron found in the tropics, subtropics and warm-
temperate zones, the cattle egret has undergone a rapid expansion in its distribution and
successfully colonised much of the rest of the world in the last century.
It has a slender, reddish beak with a bright yellow top. It has long brownish hair on the crown of
its head and its feathers are white. The nonbreeding adult has mainly white plumage, a yellow
bill and greyish-yellow legs. But in the breeding season, they grow fancy buff-coloured plumage
on their crowns, chests and backs. 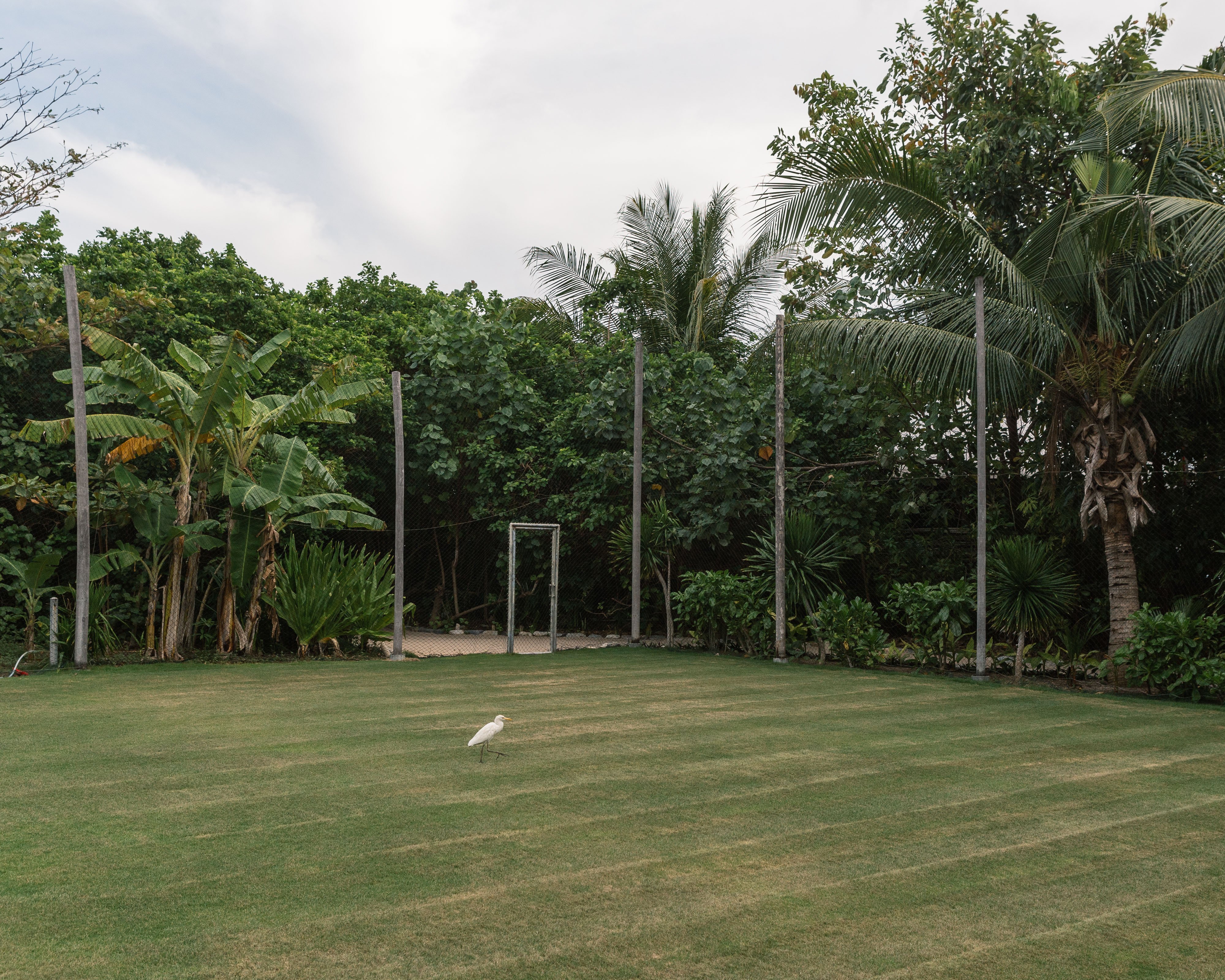 Their feeding habitats include seasonally inundated grasslands, pastures, farmlands, wetlands
and rice paddies. They often accompany cattle, eating insects directly from their bodies and
catching insects and other small prey disturbed by them.

Bawah Reserve’s island of Elang, meaning eagle in bahasa Indonesia, is named after this bird.
What’s more, the white-bellied sea eagle is the subject of multiple folk tales throughout its range
in Australia, where it is an important bird for various Aboriginal tribes.
A large, diurnal bird of prey, it belongs to the family Accipitridae and breeds and hunts near
water. 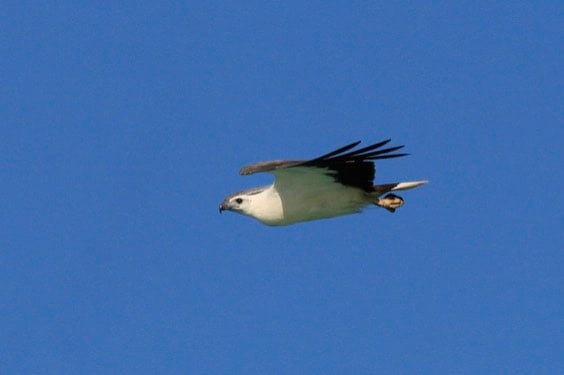 The adult white-bellied sea eagle has a white head, breast, under-wing coverts and tail. The
upperparts are grey and the black under-wing flight feathers contrast with the white coverts. The
tail is short and wedge-shaped.

Although not threatened globally, white-bellied sea eagles have declined in parts of Southeast
Asia and Southeastern Australia. One major threat is interference with their habitat, both from
human activity near their nests, which affects breeding success, and from the removal of trees
suitable for nesting. 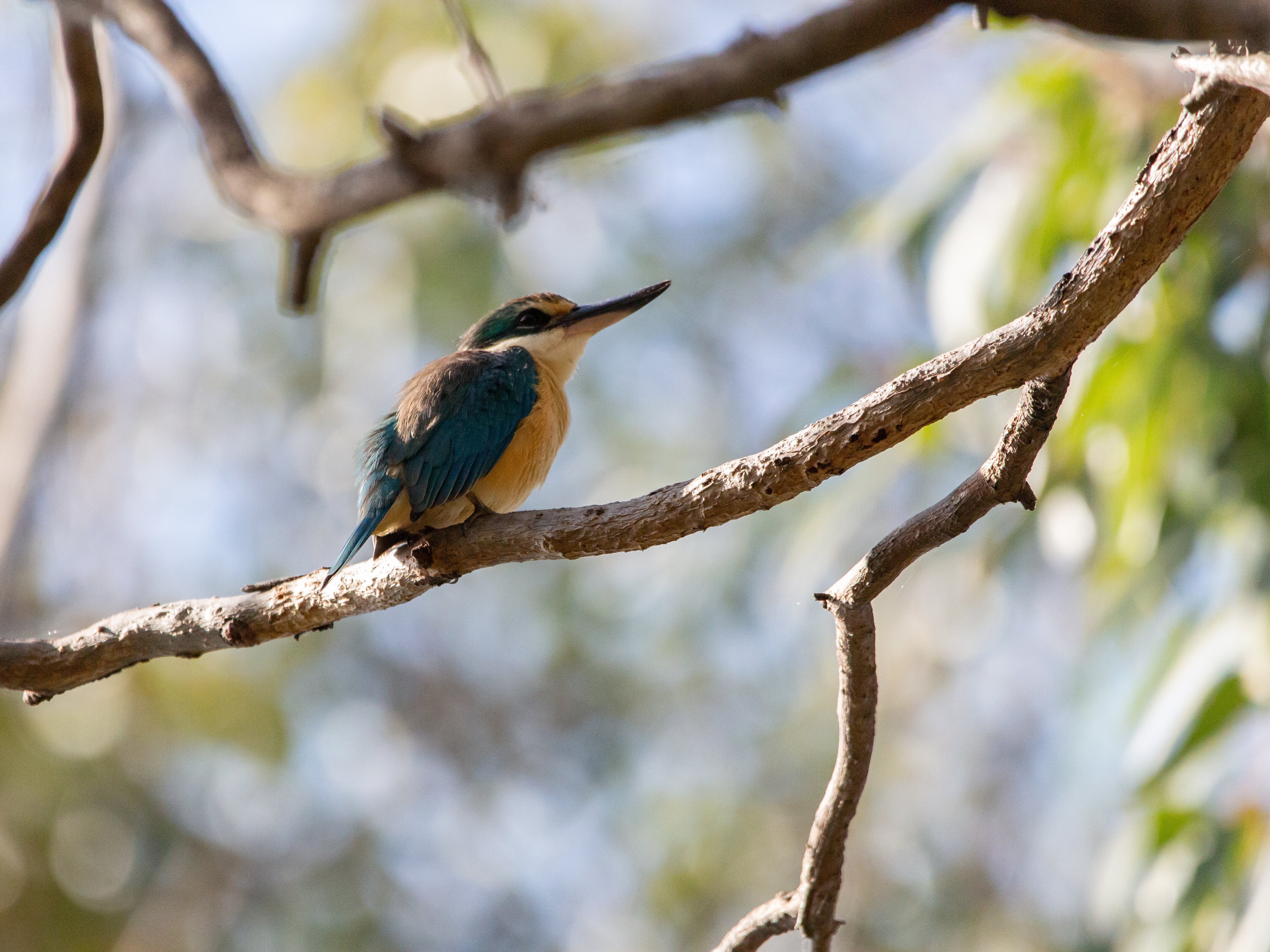 This medium-sized woodland kingfisher lives in mangroves, woodlands, forests and coastal
regions of mainland Australia and on islands from Australasia to Indonesia.
Sacred kingfishers are mostly turquoise, with a black mask, buff-white underparts and cream
collar feathers. The sexes are not significantly different, though the females are usually greener
and duller in colour. Juveniles have orangey-brown underparts.

All kingfishers are distinguished by their large, stocky bodies and long, thick, pointed bills that
are shaped like daggers. Seemingly disproportionate to the rest of the body, the bill is perfectly
designed for impaling and capturing prey.

Broadly distributed and increasing in numbers, the sacred kingfisher is not considered under
threat. 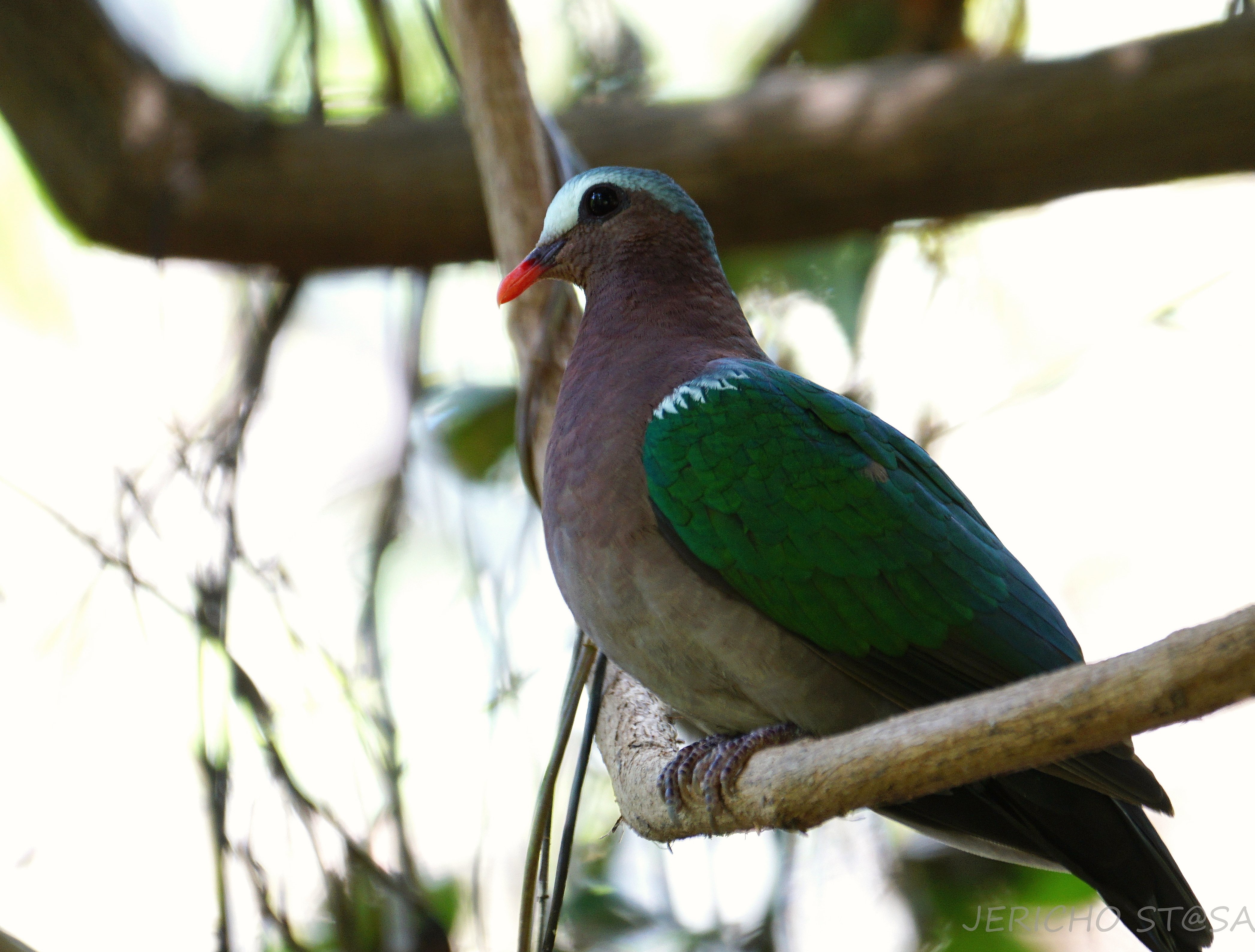 Doves and pigeons belong to the same family, Columbidae, and have many similar features. The
names pigeon and dove are often used interchangeably. However, doves are generally slightly
smaller than pigeons and have longer tails.

Quite tame and approachable, emerald doves are a common species found in rainforests, dense wet
woodlands, mangroves and coastal shrubland. They are distributed throughout tropical southern
Asia, from the Indian subcontinent east to Indonesia and to northern and eastern Australia.

This small, short-tailed dove is mainly terrestrial and spends most of its time foraging on the ground
for fallen fruit, seeds, grass plants and insects. It only roosts in trees for refuge and to sleep.
It is named for its bright emerald green back and wings. Its head and neck are rufous-brown, the bill
is bright red, the legs and feet are rufous, and the male has a white patch on the edges of its shoulders.
Prized for their beautiful colouring and markings, emerald doves are captured for the illegal pet trade.
However, the International Union for Conservation of Nature does not yet consider them in danger of
extinction in the wild.

Look out for Pied Imperial Pigeons at Bawah too: 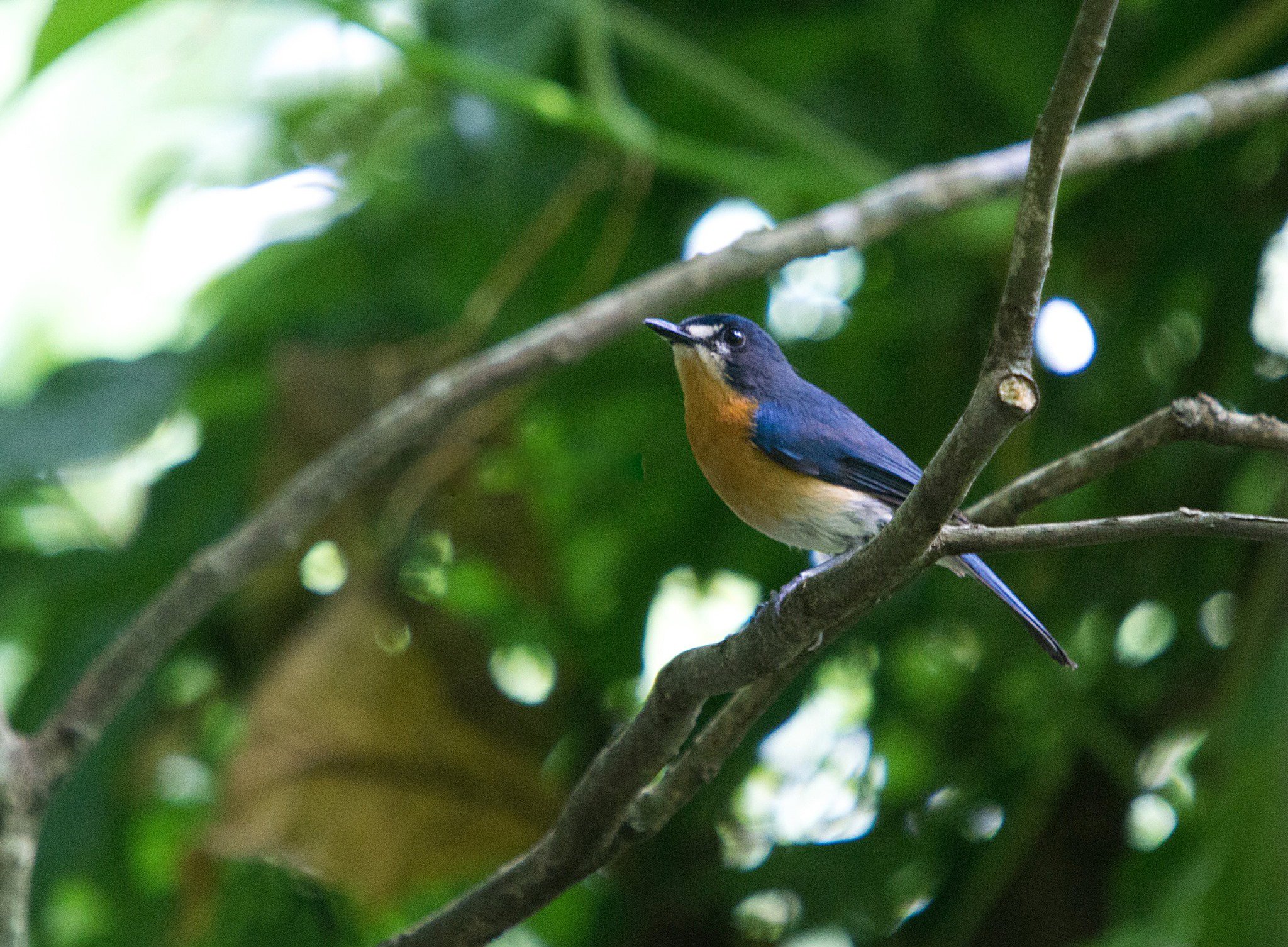 A species of small bird in the family Muscicapidae, it is found in Brunei, Indonesia, Malaysia,
the Philippines, Singapore and Thailand. Its natural habitat is subtropical or tropical mangrove
forests. It is often found on small, forested, offshore islands.

As their name suggests, flycatchers eat mainly flies and other flying insects – but also crawling
insects and small vertebrates. Both sexes sing beautifully, producing a series of fluty whistles
Around 30 different species of blue flycatcher have been identified. Though their overall decline
in numbers is attributed to loss of habitat due to human activity, most of these species are not
thought to be threatened. 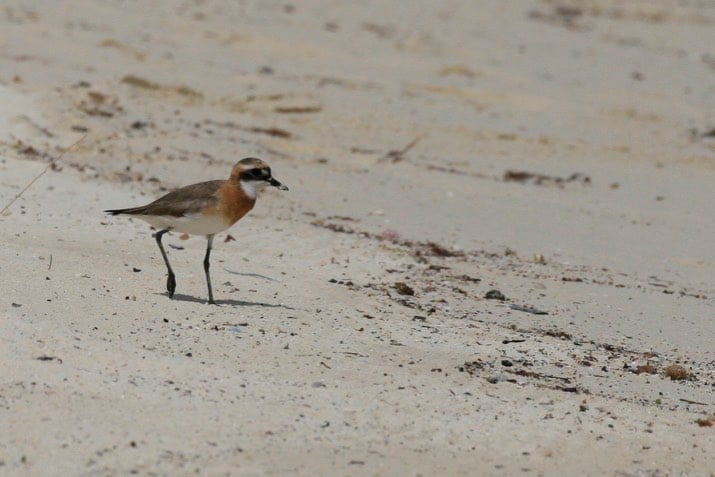 Also known as the lesser sand plover, these strongly migratory birds fly south from the Himalayas and coastal plains of northeastern Siberia to spend winter in East Africa, South Asia and Australasia. 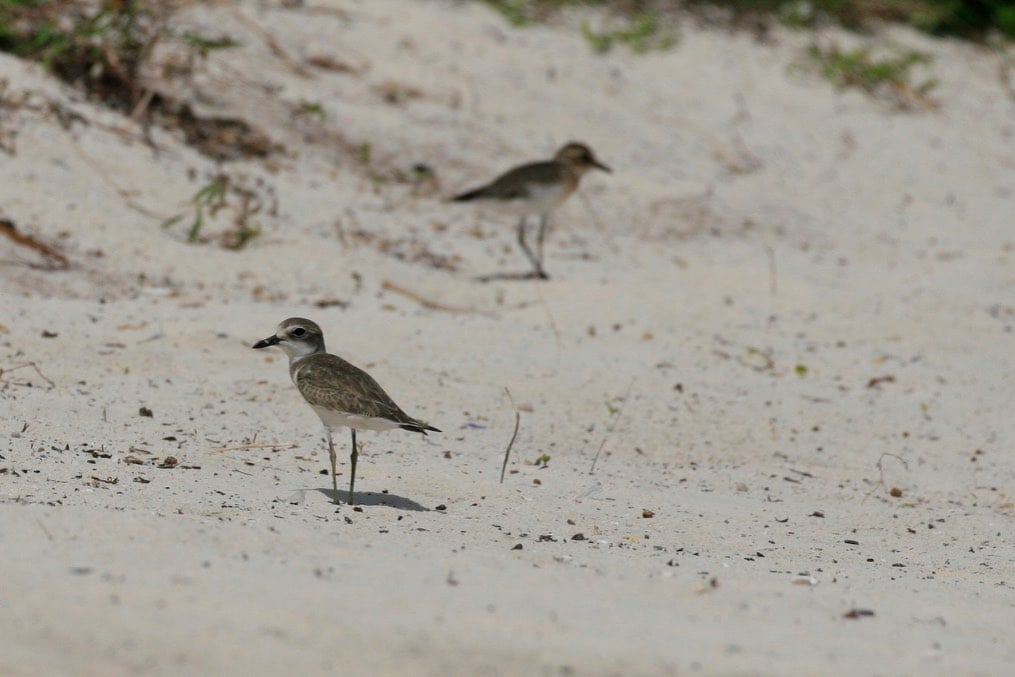 They are characterised by their long bill, long and chunky legs, grey back and white underparts,
along with a chestnut-coloured breast, forehead and nape, and a black mask. Not heavily reliant
on trees, they are at home in tundra and high-altitude grasslands, forests, beaches, tidepools, marshes, estuaries and coastal dunes.

Mongolian plovers feed on insects, annelid worms, molluscs and crustaceans. Their long legs are
ideal for foraging for prey in muddy ground or wet sand, such as the beaches at Bawah Reserve.

The Mongolian plover is threatened by the degradation and loss of its habitat, caused by
agricultural expansion and tourism development. Currently, however, this species is not
considered globally endangered.

We love to hear about any sightings of rare birds – do let us know if you spot any.

Also, be sure to look out for our new, stress-relieving Zendoodle Colouring Book of Bawah Reserve Fauna. It features several birds of Indonesia, along with many other beautiful and striking creatures.

Holidays are the perfect time to indulge in board games! Whether you go for one of the...

Every year millions of beautiful trees are cut down and transported around the world to...

What should I serve for Christmas nibbles and drinks?  Given most of us have not been...

Looking for ways to be more sustainable with your gift wrapping this year?

Christmas is such a fun and festive time of the year that it is easy to forget the...

The countdown has begun and Christmas day will be here before we know it.  It's time to...